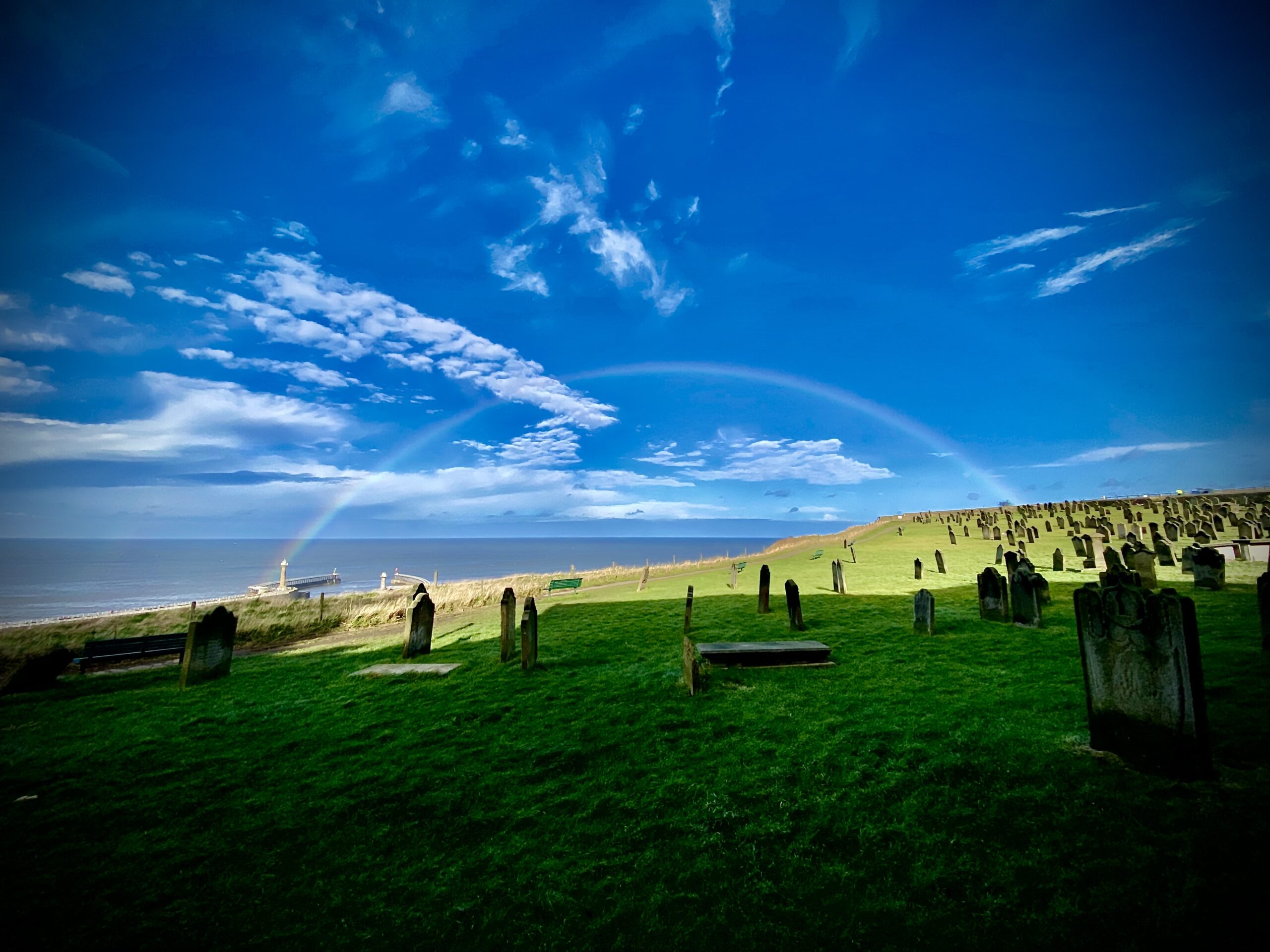 I set off on a rather rainy morning but managed to outrun the bad weather on my journey north. The day turned out to be pleasantly warm with sunshine and rainbows. For my second and slightly longer trip, I intended to explore the places associated with Osana, St Everilda, Begu (Part 1), St Hild, St Margaret and St Bega (Part 2).

Following Blair’s “Handlist of Anglo-Saxon Saints” my journey led me, first, to Howden, exploring the site where “Osana” was buried in the Minster. A miracle associated with her tomb (shaped like a seat) tells of a concubine of Howden’s parson which sat down and was stuck until she repented her sins. Also, Barbara York noticed a tomb at Jouarre (France) (pers Comm.), pointing to an Irish or Northumbrian descent. So, Osana might have been a real person. Beyond the historical facts, as a landscape archaeologist I am amazed by the setting of the minster in the landscape. The place is overwhelming. I am approaching my destination on small roads lined by rows of tiny, medieval houses and suddenly, rounding a corner, I am faced with the impressive remains of the chancel and chantry house adjacent to the still intact Minster church of St Peter. A cemetery developed in between the 14th century ruins. St Peter’s Church, on the site of an earlier Anglo-Saxon church continues using the place as a religious centre. Like many places with an Anglo-Saxon tradition, which I will visit throughout this project, the remains of the earliest churches or monasteries are long gone. But the continuation of the places for religious purposes over a period of more than thousand years is amazing. Howden Minster did not develop into a cathedral, like others did but the building is awe-inspiring. The interior is tells the story of change and adaption and the stained glass windows tell colourful stories of the bible brought to life by the changing sunlight from outside.

To discover the landscape in which St Everilda lived and worked with up to 80 nuns in the vicinity of York, I stopped at Everingham and the small church dedicated to the saint. Bishop Wilfrith offered Everilda a piece of land, perhaps in the area which is now Everingham Park, location of the Chapel of St Mary and St Everilda and Everingham Hall. The small church of St Everilda lies just 100 yards from Everingham Park. The earliest part of the Grade II listed church dates to the 13th century, but it is not clear where Everilda’s church and nunnery’s exact location was. So, might it be here? The landscape is pleasantly alternating between fields and small woods.

My next stop is also connected to St Everilda and might have been the place where she was buried: The Grade II* listed church of St Everilda in Nether Poppleton with the oldest parts (chancel) dating to the 11th century. The flat surrounding landscape tells the medieval story of fish ponds and a moated site at the edge of the village.

Continuing my journey eastwards, I stopped at the Grade I listed parish church of St Peter at Hackness. The present church might stand in the location of a nunnery founded by St Hilda, where the nun Begu foresaw St Hilda’s death. The story of the nun Begu might have been conflated with the Irish princess Bega of St Bees, who fled her marriage with a Norwegian prince to the coast of Cumbria, where she was able to live according to her earlier vows, a life of celibacy and Christian devotion. The Priory of St Bees is still associated with St Bega. However, it is not clear if Bega was a real person or a cult that travelled across the sea and emphasised the strong links between Ireland, Britain and Scandinavia. It is also possible that Begu, who played a minor role in Bede’s account and the connection to the saint Bega (not mentioned by Bede) was conflated intentionally during the 11th century to increase the prestige of both Whitby and St Bees.

Unfortunately, this was the second church that I found locked (after St Everilda at Everingham). I find it strangely discomforting and frustrating to find places of refuge, consolation and contemplation locked and shut – a necessary measure for safety reasons during the Covid pandemic. I was, therefore, not able to see the fantastic remains of an 8th/9th century Anglo-Saxon cross for myself, displaying a prayer dedicated to St Æthelburh.

My last stop for the day is Whitby and the site of St Hilda’s double monastery founded in 657 in Streanæsalch, as it was called then. To take the whole scenery in, I first approach the site from the town side across the River Esk. The sight is still impressive even after the destruction of the Abbey. The fragile, aged skeletal remains of the former Abbey church dominate the cliff to form the landmark Whitby is famous for. Against the rising sun on the following morning, the view is even more spectacular. Due to the approaching storm “Dudley”, Historic England has temporarily closed the site for safety reasons’ and my visit has been postponed to the afternoon. I can only hope the weather allows me to visit later and document the amazing landscape as we experience it today.

The image of the Anglo-Saxon cross at Hackness was kindly permitted by Britain Express https://www.britainexpress.com/counties/yorkshire/churches/hackness-st-peter.htm

Haigh, Daniel H. Notes on the History of S. Bega & S. Hild: and on some relics of antiquity discovered in the sites of the religious establishments of them. J. Procter, 1858. (E-book accessed 15-02-2-22 through: https://play.google.com/store/books/details/Daniel_Henry_Haigh_Notes_on_the_History_of_S_Begu?id=O_kGAAAAQAAJ)