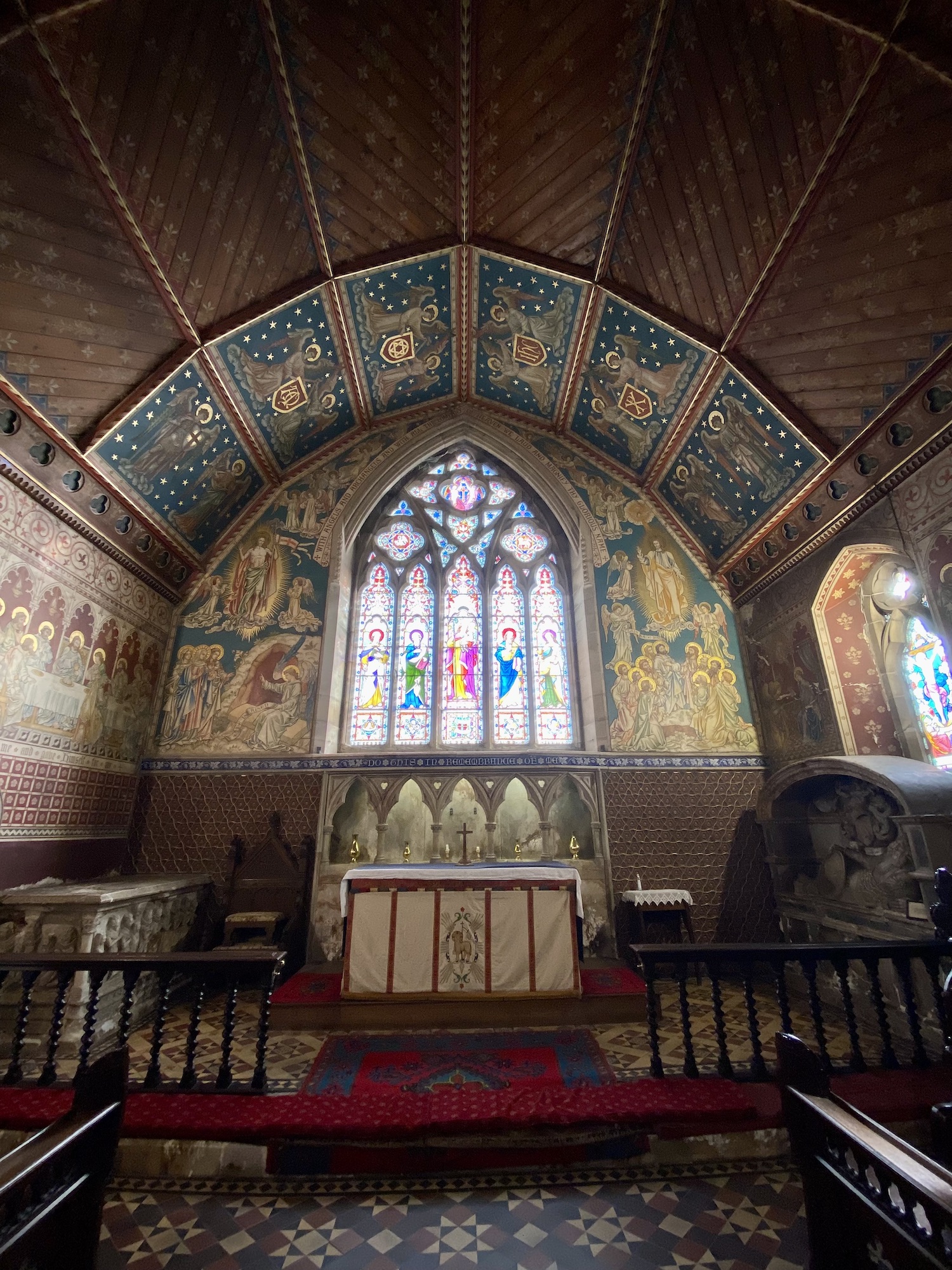 To avoid locked doors of smaller churches along my journey and to meet the people involved in creating the community around the saints, keeping these amazing buildings alive, I put much effort into planning: calling or emailing churchwardens, checking opening times and events, and sorting out appointments with reverends and vicars. I wanted to meet the people that give the places personality, a reason for continuation and maintenance – a sense of place.

I first stop at Hanbury, a small, lovely village with a beautiful Grade II* listed church dedicated to Saint Werburgh. Werburgh was the daughter of King Wulfhere of Mercia (a pagan) and St Ermenilda (a Christian), the daughter of King Ercombert of Kent. After her father’s death, she became a nun and founded several nunneries at Hanbury, Trentham, Weedon and Repton on behalf of King Ethelred. She was also abbess at Ely.

Legend has it that a flock of geese came down on the land of her father (or on land of a nunnery, depending on the source), eating the crop. Werburgh instructed the servants to collect the wild geese. One of the birds was killed, cooked and eaten by some of the servants, leaving only bones. When Werburgh instructed the birds to fly away and never come back, they refused as one was missing. Werburgh brought the killed bird back to life from the bones, and the flock left. The sign of the geese became proof of the pilgrimage to the shrine of St Werburgh in the middle ages and still is.

The church website tells me that the post office (in the church!) is open from 10 am, and every first Tuesday, everyone is invited for a coffee and a chat. What a lovely start to my journey! The post office, community room and kitchen are modern alterations in the west end of the nave. Compared to other churches, this one really feels like a warm and welcoming place for the community – a sense of belonging. I am met with a smile, a cup of tea, and much interest in the project. “You know that Werburgh’s remains went to Chester?” Where they were lost, after the nuns of Hanbury had – according to the legend – put so much effort in stealing them from Trentham, where she died in 699, fulfilling St Werburgh’s wish to be buried at Hanbury. Her body was found to be uncorrupted 9 years after her death.

I am given a tour around the church and a leaflet about the church. A statue above the portal dating to 1842 and a stained glass window give an image of how the saint is remembered today. The painted wooden panels and paintings in the chancel are extraordinary. With the dominant colour of brown and gold, they are not loud and distracting rather warm and calming.

This visit shows very clearly that a church is as much a building with a history and a saint as it is the community that keeps the history and the building alive. And the journey will continue to Chester and St Werburgh’s shrine.

Back to the beginning: the relics of St Eanswythe