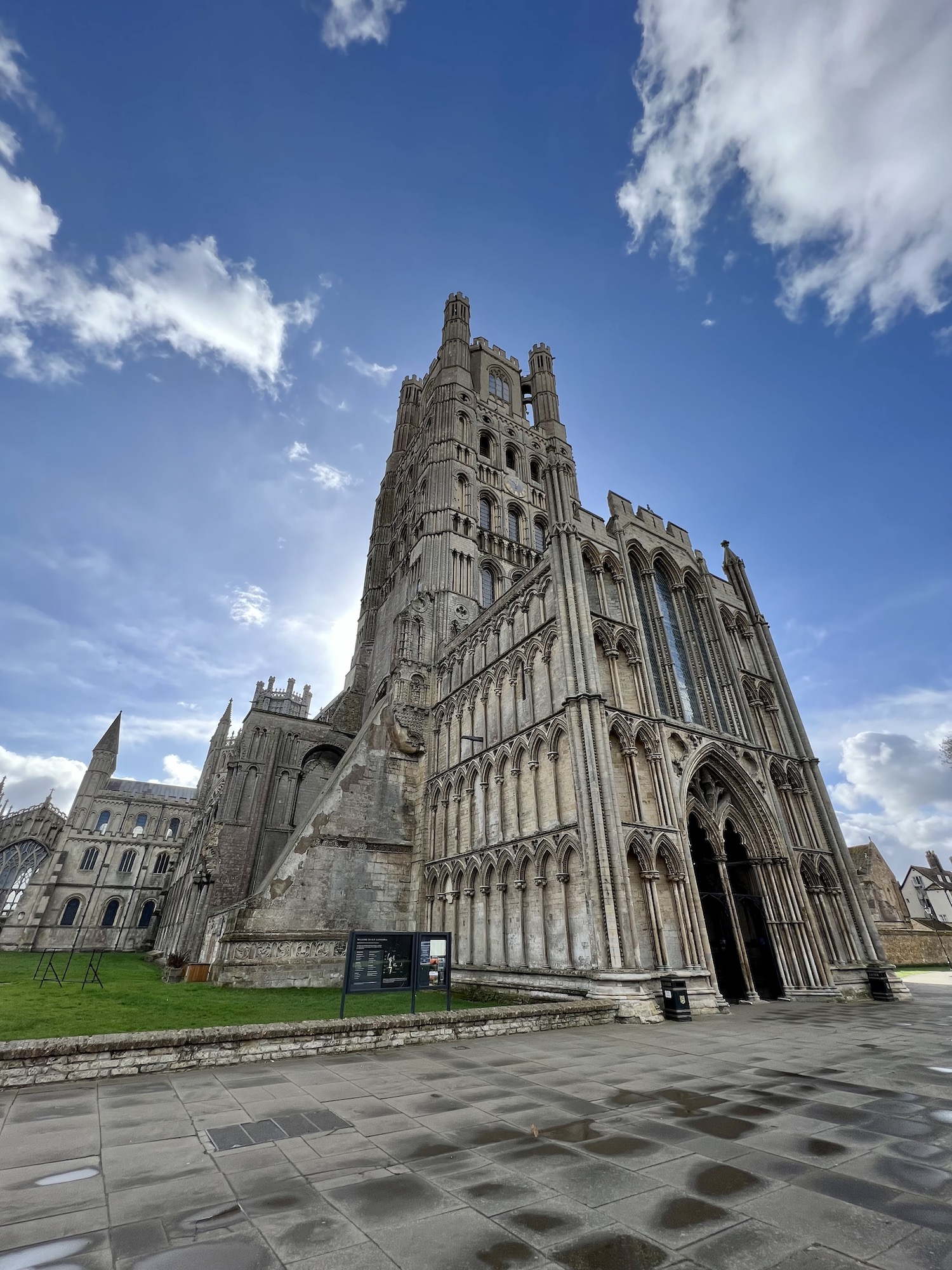 Ely is a beautiful small city with an enormous and wonderful cathedral on the highest land in the fens. But before I go to see this impressive masterpiece of art and architecture, I stop at a more humble church building just half a mile north of the cathedral. Humble perhaps, but important nontheless. St Etheldreda’s Church in Ely has one of the two relics I have come across on my journey: the hand of St Etheldreda (the other one was the collar bone of St Margaret – see my blog on the ‘Journey north (part 2)’). Father David shows me the documents confirming the permission to expose the relic dating from 1955 and the history of authentication by various Bishops. The hand is set in a niche beside the chancel. Father David tells me that the relic has a special meaning for his congregation. But while relics were extremely important for economic reasons in medieval times, attracting pilgrims, raising the churche’s prestige and generating income, this more economic view on relics has changed in modern times. I would be very interested to learn more about the meaning of relics today. Please feel free to comment below and let me know what you think.

Ely Cathedral’s white facade gleams in the bright sunlight. I am meeting Elaine and Susan, my guides for today and a treasure trove of knowledge on the cathedral and the history of its Abbesses. The history of Anglo-Saxon Abbesses at Ely is very rich. Etheldreda founded a double monastery in 673AD. Unlike Peterborough Cathedral, Ely suffered during the dissolution and was damaged during the Reformation. Etheldreda’s shrine was destroyed, and the stone elements displayed in the cathedral might have been part of it. Etheldreda was highly esteemed by Bede, as she managed to be married twice and remain a virgin, a trait Sexburga, her sister and Abbess, after Etheldreda’s death, did not have. Perhaps a reason why Bede did not give the same veneration to Sexburga. Nevertheless, her children went on to become kings and saints themselves. There is only one image in the cathedral that is believed to represent St Sexburga. Together with St Etheldreda, the saints are carved in the effigy of Bishop Hugh de Northwold. St Etheldreda’s images, statues, and the ledger stone marking the location of her shrine can be found everywhere around the cathedral. In the octagonal tower, rare medieval stone carvings survived from medieval times. Modern depictions of St Etheldreda are statues, banners and modern stained glass windows at the entrance to the lady chapel. The victorian choir stalls also show a carving of St Etheldreda. After this richness of visual features of commemoration around the cathedral, the stark contrast to the lady chapel, with the defaced frieze in the lower niches caused during the Reformation, could not be stronger. Another Abbess of Ely was Eormenhild, and Withburga also rests here, but this is a more exciting story.

St Withburga founded a monastery at East Dereham and was buried there. However, in an act of ‘religious piracy’ (as Elaine explains it with a twinkle in her eyes), her body was excavated and stolen to be buried at Ely Cathedral. She is noted as a sister of Etheldreda and Sexburga. However, she died more than 50 years after Sexburga and 75 years after Etheldreda, which makes it appear to have been a forged ancestry trying to design a connection to the founding abbess and venerated saint. In the place where she was exhumed, the graveyard of St Nichola’s Church, a spring appeared, and her body was found to be uncorrupted 55 years after her death – a certain sign to declare somebody a saint (and as an archaeologist, knowing that this can be a result of the extraordinary preservation of organic material in waterlogged conditions).

Ely is a fantastic place to visit, and the history of female saints and how they have been treated by history is an intriguing one. I am not able to tell all the stories and highlight the details of the cathedral in this short blog. So, I can only suggest visiting Ely and exploring the history yourself: a journey well worth travelling.